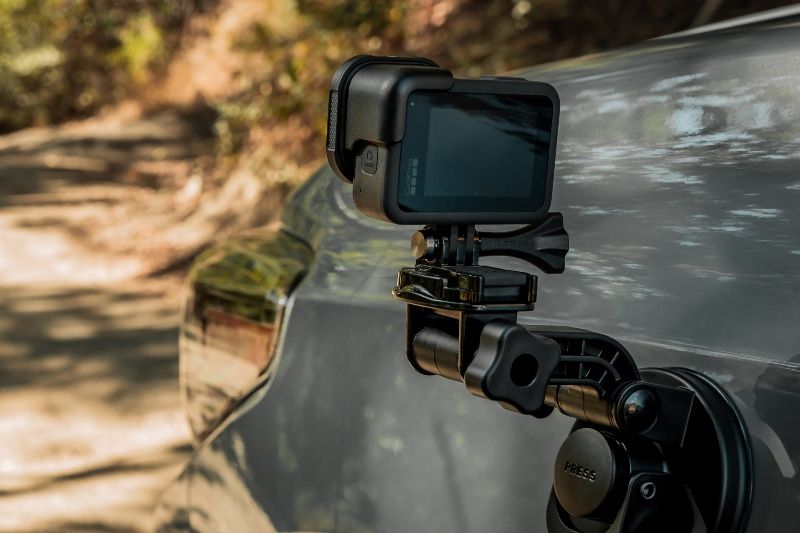 Items purchased through links help us. By doing so, we make a small commission at no extra cost to you. Learn More.
While the GoPro Hero 6 wasn't as successful as the Hero 5, it still holds its own nearly 6 years after its release.

But, seeing as 6 years have passed, what's the best memory card for GoPro Hero 6? There are so many options on the market - knowing which memory card is the best is more important than ever.

That's what we're going to answer in this article. We will discuss resolutions, bitrates, and frame rates to determine which one is the best - and while doing that, you'll learn why these aspects are so important - ultimately helping you make this same decision on your own in the future, regardless of the device.

By the end of this article, you not only learn which memory card is best, but you'll also learn why it's the best.

This is an overview of the memory cards that we recommend in this article.  We advise that you read the rest of the article to understand why these memory cards are being recommended.

Improvements Of The Hero 6 Over The Hero 5

At first glance, there isn't an apparent improvement of the Hero 6 from the Hero 5.

Let's discuss some of these improvements in more detail and how they affect the purchase of your memory card.

Bitrates Of The GoPro Hero 6

As we've included in our previous GoPro articles, we're including bitrates for the Hero 6.

Reference the table below for the bitrates of common resolutions and frame rates. Let's discuss the reason bitrates are so important when purchasing a memory card.

So, Why Is Bitrate So Important When Recording Video (On The GoPro Hero 6) 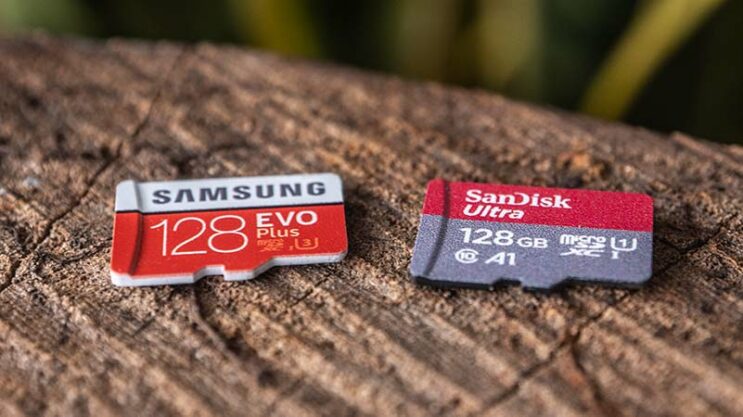 Regardless of what you're recording with - the bitrate (the rate at which your device records data to the card), is incredibly important.

Does this make sense? If your card is too slow to capture the data flowing from your device - there will be obvious complications.

It's highly recommended to exceed this rate - you have a much better chance of avoiding errors/corrupted files - and the lifespan of your card is greatly extended... it doesn't have to work as hard.

The Difference Between MB And Mb 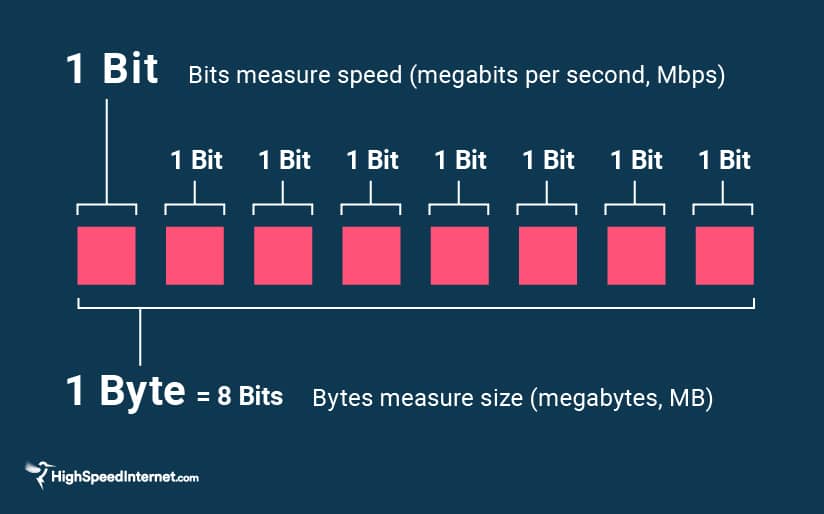 Many people don't realize there is a difference between the two acronyms. But, there's a significant difference. This directly impacts your memory card purchase decision.

So, the meaning of each acronym is:

It takes 8 megabits (Mb) to equate a single megabyte(MB). So, in theory, a Mb is 8 times smaller than a MB.

When looking at bitrates of the GoPro Hero 6 - its fastest bitrate is 78 Mb/s. That's 78 megabits.

Every card on this list far exceeds this requirement.

Going forward, make sure to check your device's bitrate and pay close attention to which acronym they use. It's very easy to mistake Mb/s for MB/s (it's very common).

The GoPro Hero 6 only accepts the Micro SD form factor. These are the tiny SD cards (not the larger ones).

Of these Micro SD cards, the GoPro Hero 6 supports:

Maximum Capacity Of An SD Card For The GoPro Hero 6

The maximum capacity of a single card is 512GB. This is according to GoPro themselves (reference the 'Hero 7 Black and previous' section)

What Size Memory Card Do We Recommend? 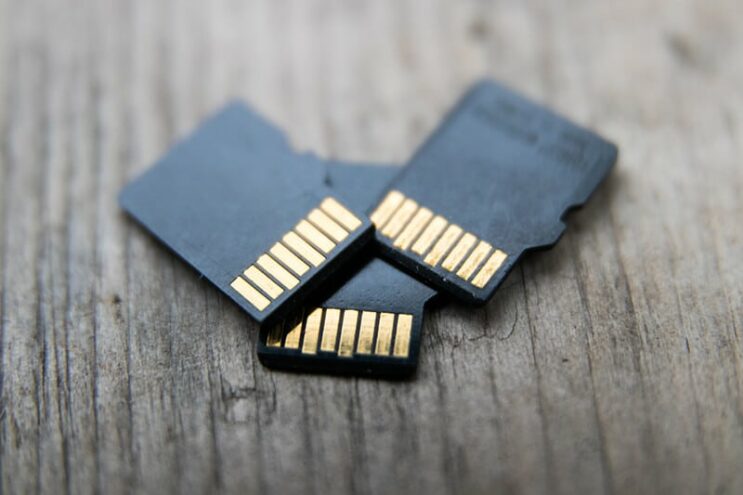 This is a subjective topic. It ultimately comes down to what you're using your GoPro for and how long you're going to be recording.

We recommend 128GB. This equates to just about 3 hours of recording at 4k. This time increases as you lower the resolution/framerate.

We feel this is the sweet spot between too small and too large.

A serious risk that you run when using large cards (256GB+) is having all of that footage on the same card. If that card, for whatever reason, corrupts - all of that data is lost. When you fill-up a 256GB card, you're looking at about 6 hours of footage. This doubles at 512GB.

We recommend spreading this time between cards to ensure that you still have something if anything were to happen to a single card. A great solution to this problem (for GoPro) is offer dual card slots (which is why I love Sony mirrorless cameras). 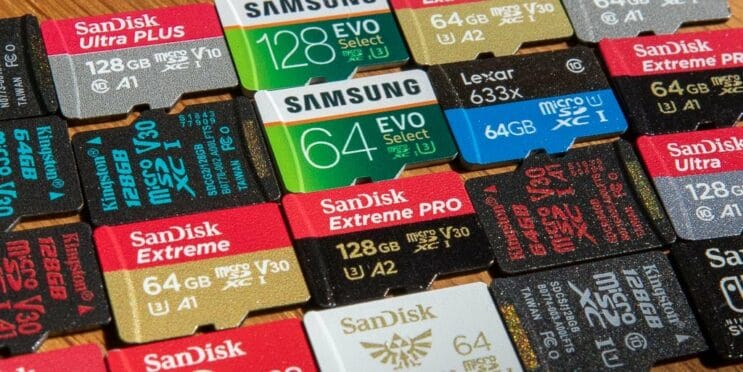 You can also make your determination on how often you're able to offload your footage from your memory card. Are you able to offload often? Maybe a 64GB would be a better option. Are you not able to offload very often? Don't exceed 128GB - just purchase more 128GB cards (or 64GB cards if you decide to).

While we can't alleviate file corruption or cards going bad - we can mitigate the 'damage' by spreading the data across multiple cards.

Now let's get started with the meat and potatoes of this article. You've come here for the answer - we will give it to you along with a couple of other options! 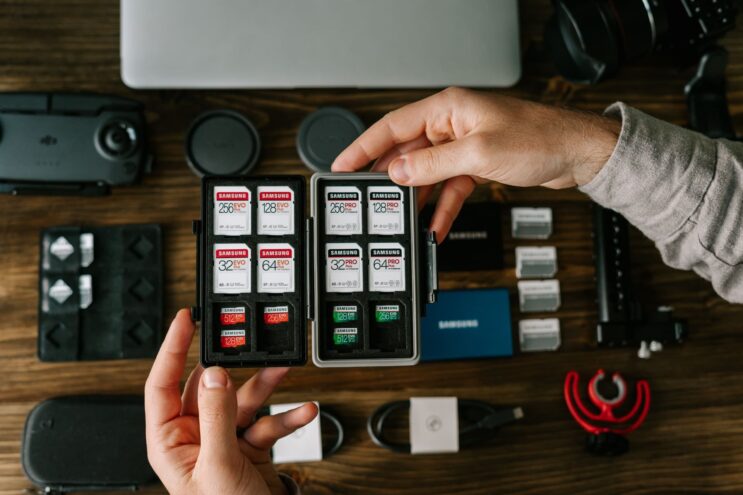 All 4 brands have great reputations and equal reliability. I currently use all 4 brands in one way or another (Lexar in my drones, SanDisk in my cameras, Samsung as hard drives and backup SD cards, Prograde for the fastest cards).

I have never had a single one of them corrupt (but have had PNY and Transcend corrupt over the years). 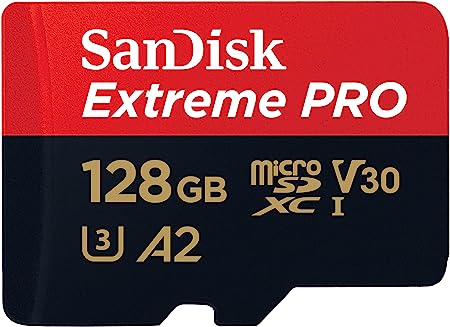 SanDisk Extreme Pro 128GB
$24.75
Buy Now
We earn a commission if you make a purchase, at no additional cost to you.

SanDisk is regarded as the leading manufacturer in the memory card/SD card market.

It makes sense - considering their reliability ratings and pricepoint appeal to the masses.

It passes all of the video recording checkboxes too:

I use this card (multiple) in all of my action cameras. I haven't had a single issue out of them. No corrupt files or inconsistent transfer speeds. It just works - over and over again. They're also tested and supported by GoPro themselves.

All SanDisk cards are:

Again, you get this capacity and reliability at less than $30. A total steal. 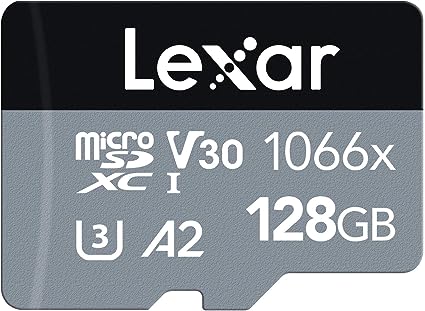 Lexar Professional 1066x 128GB
$20.99
Buy Now
We earn a commission if you make a purchase, at no additional cost to you.

Lexar is the second manufacturer that's tested and supported by GoPro themselves. I use Lexar exclusively in my drones. I haven't had an issue with reliability or recording even during the winter at higher altitudes (200ft+)

It passes all of the recording requirements we mentioned before:

While also boasting a whopping 160 MB/s transfer rate and 95 MB/s write speeds. This greatly exceeds the requirements of the GoPro Hero 6.

Did I mention it comes in about 15% less expensive than the SanDisk version? Yeah. On average it's less than $25.

The only reason I don't recommend the Lexar over the SanDisk is the reliability that I've had with SanDisk. I've put SanDisk cards through hell (dirt, heat, cold, thousands of writes in a single day)... and they've never failed me (knocking on wood right now). I haven't put Lexar through the same stress (I may in the future).

But, you could have had a bad experience with SanDisk - it happens. There is luck involved. This would be the perfect opportunity to purchase one of these instead.

The choice is yours really. They're both great brands and cards. You won't go wrong with either. 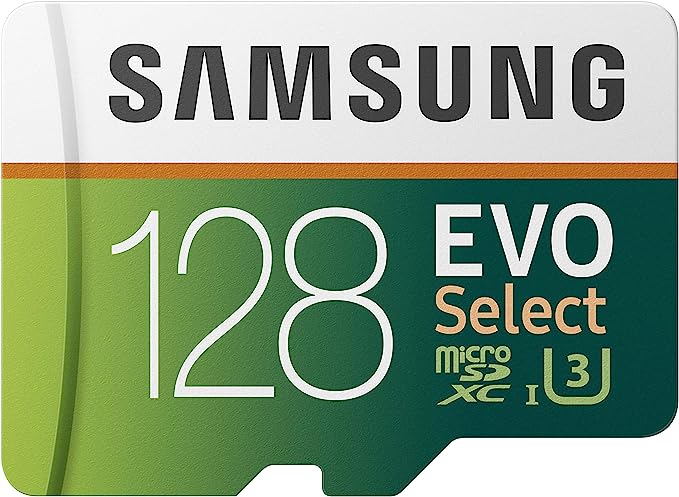 SAMSUNG 128GB EVO Select
$69.99
Buy Now
We earn a commission if you make a purchase, at no additional cost to you.

I threw Samsung into the mix as a great third option.

I've been using Samsung drives ever since I purchased their EVO drives in late 2012 to early 2013.

They haven't failed me yet.

I currently use them as backup. This isn't that they're worse than the ones mentioned above - it's just personal choice. I have Sandisk in my cameras and Lexar in my drones. I haven't had a need to change.

If you're a Samsung fan and want their EVO performance and reliability - you wouldn't go wrong with the EVO select.

Be aware, this card is about 30% more expensive than others mentioned in this list (a little less than $40). But seeing as this card has the most reviews out of any SD card on Amazon (145,000+ reviews) - with a 4.5 overall rating... that has to say something about their reputation and reliability. 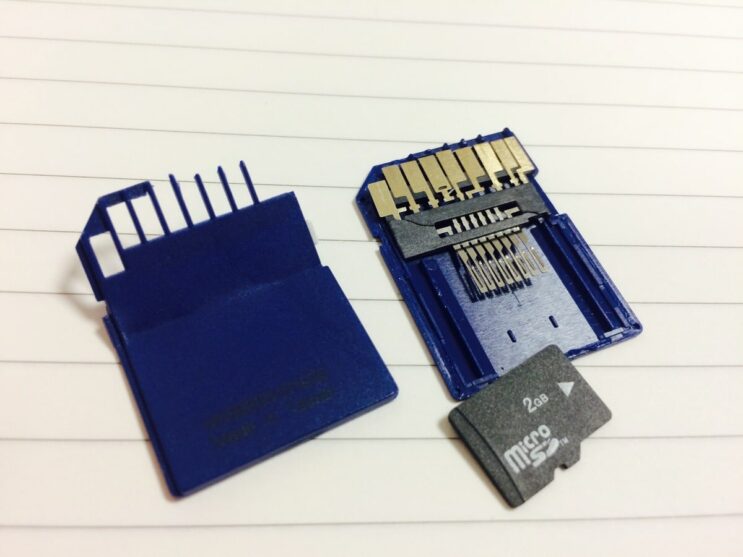 If you currently have a SD card reader - that's great. If you have a regular sd card reader (with a micro SD reader), and use an adapter for your micro cards - stop doing this right now.

The adapter is the piece that your micro card slides into and adapts it to standard SD card readers (and devices).

There is a major flaw in doing this. It's the adapter itself.

Most adapters are cheap and break very easily. The sides also split from each other just as easily.

There are two problems with this. For one, you become reliant on the adapter and when it does break - you don't have another or a micro sd reader to offload your footage.

The other issue (major) is the adapter/card getting stuck in your device. 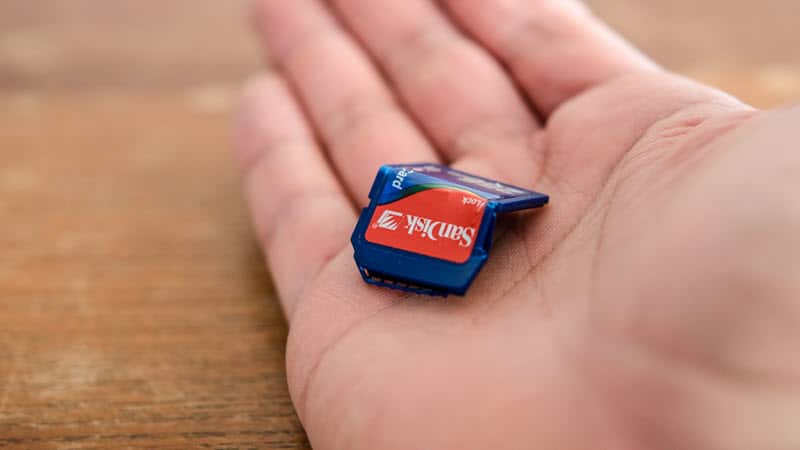 Seeing as the adapter isn't rigid (very flimsy) - it has a tendency to bend and twist. The smallest of bends and twists will lead to these areas getting stuck inside of your device. This leads to you having to get it professionally removed or leaving the card in there (indefinitely) and offloading it through your device.

This can create many problems and is completely avoided if you purchase a memory card reader that supports micro SD cards in their nonadapted form.

You'll get faster and more reliable transfer speeds too.

If you're using micro SD cards in a device that requires regular SD cards - stop right now and purchase regular SD cards instead. The moment you 'learn' may be too late and cost you hundreds in repairs and possibly a damaged or corrupt card.

That wasn't too bad, was it?

You'll now leave this article knowing a few things you didn't when you arrived. We went over memory card capacities, bitrates, and memory card speeds... all of which will help you make your purchase.

And if followed like you read here today - it can help you with any electronic that writes to an SD card in the future!

I really hope you learned everything you needed today. If there was anything I missed, please feel free to reach out and I'll get back with you as soon as I can.

Checkout out related articles in regards to video:

Until next time, be safe out there and continue learning and creating!